The Truth About Diabetes

Home/Uncategorized/The Truth About Diabetes
Next

The Truth About Diabetes

Something was clearly wrong with Doug Banks when he appeared at V-103’s splashy booth at the Black Women’s Expo last weekend at the McCormick Center. The popular radio personality was his usually happy, larger than life self, but had lost a tremendous amount of weight. The face that greeted his flock of fans for years at events, had changed. Two days later, Banks was dead at just 57 years. Diabetes had killed him.

Banks publicy battled Type 2 diabetes for 15 years. Doctors say Type 2 diabetes affects African Americans and minorities at a much higher rate than whites and at least one physician said it can be attributed to the daily diet of Blacks.

For decades, Banks was the beguiling radio personality that reigned as king on the FM dial in major cities across the country. When he signed off this life for the final time on Monday, April, 11, it shocked many loyal fans and got many talking about a subject that’s not often discussed during morning shows or everyday conversation among Blacks. 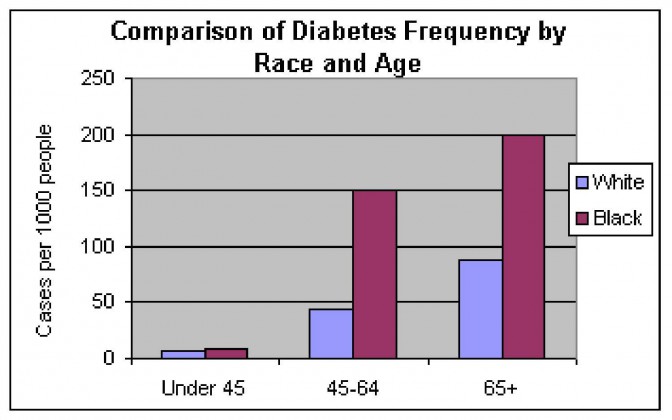 Diabetes. The disease that has claimed the lives of millions of Blacks took the life of one of Chicago’s most celebrated and well-loved figures. Now, millions mourn Banks’ death, diabetes has reemerged as a concern in the Black community. Bank’s death has renewed calls for a healthy diet and lifestyle, a problem that many Blacks face on a daily basis.

At the end of her life, Jazz legend Ella Fitzgerald was confined to a wheelchair in her Beverly Hills home. Her lower legs were amputated and diabetes severely damaged her eyesight. Like Banks, she became a victim of the disease that has killed individuals from all walks of life. But for years the biggest group suffering from diabetes has been people of color.

In 2005, Academy Award winner Halle Berry came out of a diabetic coma after collapsing on a set. Since then, she and some Black celebrities with diabetes have managed to live healthy lives. They include singer Patti Labelle, comedian Sherri Shepherd and former American Idol judge and musician Randy Jackson, who disclosed his illness during a television commercial in 2008.

Banks’ death brings a fresh spotlight on a serious disease. Many remember when another celebrity, former Los Angeles Lakers basketball superstar Magic Johnson brought national attention to the AIDS crisis when he announced in 1992 that he contracted the HIV virus. It’s an ever-recurring story of Black celebrities becoming the face of a problem that has wiped out generations in the Black culture. Even in death, Banks has people talking about a serious problem affecting his people.

Diabetes has afflicted Blacks for a long time. There are two types of diabetes. Type I is when the pancreas does not produce enough insulin and patients have to take daily insulin shots. That is one that is usually diagnosed in people as a child, according to Dr. David Zich, who practices Internal Medicine at Northwestern Memorial Hospital. He said Type I diabetes can be controlled with modern medicines and people can live long, healthy and productive lives. Zich says Type I diabetes can also be hereditary and is influenced by other environmental factors as well. Doctors say Type 2 is the most common disease that’s caused by an unhealthy lifestyle.

“It’s what we’re eating,” says Dr. Terry Mason, Chief Operating Officer at Cook County Department of Public Health and host of “A Doctor in the House” every Sunday morning at 10 a.m. on radio station WVON 1690 AM.

“We’re eating more meals that are produced outside of our home. We’re eating a ton of processed foods. Diabetes as well as cancers and heart disease can be lessened by doing a simple thing; drinking more water and eating more natural green foods like fruits and vegetables.”

According to the U.S. Department of Health and Human Services, there are four (4) times as many Blacks diagnosed with diabetes today as there were in 1968. And for every 6 white Americans who have diabetes, 10 Blacks have the disease. Among Blacks 20 years and older, the prevalence of diabetes is 8.2 percent compared with 4.8 percent among non-Latino whites.

Today over 2.2 million Blacks have diabetes; 1.5 million have been diagnosed and 730,000 have not yet been diagnosed, according to the National Institute of Diabetes and Digestive and Kidney Diseases.

In 1995, there were 27,258 new cases of kidney failure attributed to diabetes in Black Americans. Blacks are much more likely to undergo a lower-extremity amputation than white or Latinos with diabetes. In 1994, there were 13,000 amputations among Black people with diabetes, involving 155,000 days in the hospital.

According to the World Health Organization Global Diabetes report, in 1980, 108 million adults had diabetes. By 2014, that number jumped to 422 million. Researches also found that diabetes killed 1.5 million people in 2012 and 2.2 million died from high blood-glucose, a complication of diabetes.

Death rates for people with diabetes are 27 percent higher for Blacks compared with whites. Diabetes is the fifth leading cause of death for those ages 45 years or older.

Mason said the average American now eats up to 110 pounds of sugar every year, compared to about 12 pounds back in the 1970’s. He said the changes in diet are also leading to obesity and diabetes being found in children as young as 12. Mason lack of exercise, or laziness are also leading factors in contracting Type II diabetes.

“We also have to get out and move more. You don’t have to go out and lift up a gym, but we have a great city with a beautiful lakefront and plenty of walking, jogging and biking paths,” Dr. Mason said. “As long as we stay away from doing that and make excuses for not doing that, we will continue to see the death rate, diseases and sickness.”

Dr. Mason said he stopped eating meat over 20 years ago and said using fresh ingredients like beans, rice, okra, greens and egg plant that have protective elements in meals, can reverse the effects of Type II diabetes for those that have it and prevent it in most cases. Mason says most people are not eating enough fruits and vegetables or drinking water because they are not having enough bowel movements during the week. He said oils from fried foods are also contributing to many health problems.

But Zich agrees with Mason that the one that is killing more Americans and debilitating even more is the Type II. He outlined risky behaviors that can increase the chances of contracting the Type II form.

“I would say the number one risk of contracting diabetes is obesity,” Dr. Zich said. “People who are able to stay thin have a decreased risk in getting diabetes. Simply by losing weight you can decrease your chances and minimize the effects of diabetes if you already have it.”

When Banks was first diagnosed with the disease, he immediately changed his diet and began a regular exercise program. The disease forced Banks to put his radio career on hold for several months while he underwent treatment for diabetes. With a multi-million dollar syndication contract with ABC Radio, Banks’ influence and appeal afforded him the opportunity to get the best medical treatments. He did all of this publicly after sharing with his millions of listeners around the country what was ailing him. Zich credits that lifestyle change in extending his life, even though he eventually lost a toe and one eye to the disease.

“The key is not to ignore it once you are diagnosed,” Dr. Zich said. “Be very aggressive in your treatment and manage it properly. Have a good relationship with your doctor. Now we have a lot of medicines that can treat this condition and we can increase your life expectancy and life quality.”

With food desserts in the poor communities, long work hours, family pressure and more stress from economic challenges, Blacks face a harder battle in keeping a healthy lifestyle. And with the high costs of healthcare, Blacks are unable to get routine checkups to find out whether they have the deadly disease.

Still, doctors say individuals must make a healthy lifestyle a priority when their lives are at stake.

“We need to move towards eating more plants and drinking more water,” Dr. Mason said. “Food is the way. If we want to keep getting the thing we got, then keep eating what we’re eating. If we want a new life, there is no middle ground, you have to change the way you eat. Once you start eating right, your blood pressure is going to go down and your blood sugar is going to go down.”

About the Author: admin